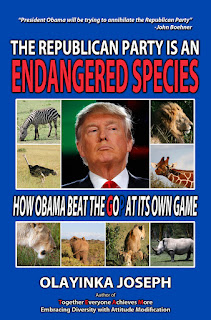 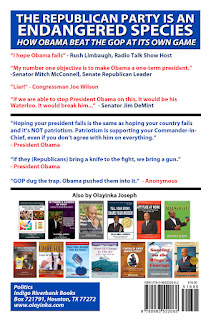 http://tinyurl.com/jgxcarn
IF PRESIDENT OBAMA WAS FOR IT, THE GOP HAD TO BE AGAINST IT

That title, referring to Mark Thoma’s blog post in the August 10, 2012 online Economist, sums up the Republicans’ attitude towards the president.
As it was widely reported, the Republicans took a definite position – to obstruct, to malign, to antagonize, to be uncooperative and uncompromising, and to be recalcitrant and every other adjective anyone can drum up to describe their intense hatred for the president. It was palpable and always on display.

Republicans came out of the gate yelling fail! fail, fail! to the president. They never looked back. They never had any intention of helping the common man. Their only hope and task was to make President Obama a one-term president, for whatever reason they alone can tell.

President Obama took office in the middle of a major recession. The world economy was on the edge of a financial cliff, ready to fall. The US economy was teetering on the brink of collapse. Mega companies holding the world’s largest investments were on their knees. The fiscal world was coming to an end, so it seemed.

As the new president was being sworn in, the Republicans had two basic options. One was to help the new president and to work with him in preventing the country and the world economy from falling into the abyss. The other option open to the GOP was to be as uncompromising and uncooperative as they could be in order to make the president fail. Unfortunately, the GOP chose the latter.

It soon became apparent that the GOP didn’t care if the country went under or if the world economy collapsed, as long as President Obama didn’t have any success or get credit for doing anything positive.

It was, and still is, no secret that the GOP was not a fan of President Obama. This has been the case from the moment he showed up on the national stage. But like many wise leaders before him, President Obama passively and wisely mounted his own defenses and offences against a known enemy. To a large extent, he has won both the battle and the war, as the GOP has failed on many fronts. It has become fragmented and now lacks the cohesion needed to continue as a viable political party.

It is true that President Obama helped fragment the GOP, but it was what the diabolically minded GOP wanted, asked for and received. The GOP will never be the same again. At least there will never be anything called the “GOP establishment” again.
The GOP could have made a choice to be part of the solution. Instead, it chose not only to refuse the opportunity to be a part of the solution, but many times they became the problem itself. And President Obama used the wisdom of his non-combative, non-confrontational and no-drama “President Obama demeanor” to help them along the way.
Now they are saddled with the likes of Trump and Cruz, one congressman who wanted to break a TV reporter into two and another one who called the president a liar in the chamber of the House—and still they look around as if some ghost did this to them.
Republicans did it to themselves.

As my friend and fellow author Liz Abamu once put it “Now they have Donald Trump on their hands. A harvest of their own seed.”

Click: http://tinyurl.com/jgxcarn now to get your kindle or paperback copy.
Posted by Ola Joseph at 9:31 AM 1 comment: